When we first moved into our current house a little more than 2 years ago, I made a habit of strolling my immediate neighborhood, eventually extending my walk-abouts into other local neighborhoods and along nearby public trails.  It was a great way to get exercise, acquaint myself with my new surroundings, and meet my neighbors.  Then my right knee started pitching a fit.  After consultations and tests, my orthopedist suggested that I find exercise that would put less strain on my knee.  Physical therapy, joint fluid injections, and arthritis medication have helped forestall surgery.  That's great but but I miss my walks - a stationary bike just isn't as interesting.  When I walked I was in tune with changes in my neighborhood but, now, almost 9 months after giving up those daily walks, I'm very out of touch.

I threw caution to the wind this morning and took a walk.  I wanted to see what was going on in early spring at other people's houses.  The first yards I looked at were those nearest to our house and, as I see these when I drive into and out of the neighborhood, there weren't many surprises there.

A lot of the houses in the large circle that constitutes our neighborhood are set behind tall hedges, gates or up steep driveways so there often isn't much to see from the street.  This hedge, with a mallow peaking through other shrub material represents a case in point.


I could see bulbs in bloom behind the bars of this gate as I wound my way around the corner.  In addition to daffodils and a camellia in full bloom, this neighbor had tulips, which I've never been able to grow successfully here.  Maybe this spot is more protected from the strong Santa Ana winds that always knock out my tulip blooms before they get started.


I walked up to the entrance to our area, where I ran into a neighbor I hadn't spoken to in months.  While we got caught up, what little was left of the fog we started the morning with lifted, which made subsequent picture-taking more challenging.  However, even better photos probably wouldn't have helped the appearance of this bed at the entrance to our street.  To the credit of the neighborhood, residents have added drought-tolerant plants here and there but the mix hasn't coalesced yet.  It doesn't help that the area's ridden with weeds.  I may have to volunteer some time there soon.


As I came back into the "circle," I saw this pine covered with cones. 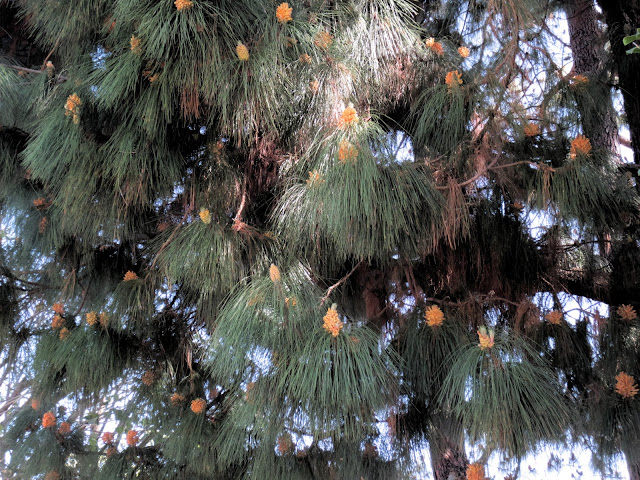 And then I saw that the house of an elderly neighbor has been put up for sale.  I haven't seen her in quite awhile.  One of her 8 cats showed up to say hello so I assume she hasn't moved out yet.

Here's another hedge long a wall 2 doors further down the street.


A renovation that's been in process for 6 or more months is still in process.


The next house on my left is one of the few in the area that maintains a large planting bed fronting the street.


The neighbor across the street has a vinca "lawn."  Vinca can be invasive here but these plants seem to be effectively contained between the agapanthus on one side and the street paving on the other.


As I proceeded in the direction of our house, I passed by an empty lot.  This property, consisting of 2 large parcels with a view of the harbor, has been empty for years.  I've been told that the house that once stood here burned down and the owner is unwilling to sell unless he gets the price he wants for it.   I'm sure the wildlife enjoys the space in the meantime.  There's an interesting plant growing there I wish I could identify.  It grows to the height of a small tree; has large, textured leaves; and produces lavender flowers that the bees seem to adore.


I passed the elaborately terraced front yard of another of my neighbors, an avid gardener.  In addition to alstroemeria, California poppies, salvia, and citrus trees, her front yard contains a spectacular leucospermum in full bloom.

Her garden puts the rest of the neighborhood to shame.

A neighbor who finished construction on his house last year has finally put in a garden.  He's kept the front garden simple in keeping with the simplicity of the design of his house.

I came across a pretty 6 foot tall Abutilon as I neared home.


My own front yard is partially hidden behind a well-established shrub hedge as well.  I'll share a view of my front garden in a future post.

Posted by Kris Peterson at 6:15 PM