In a Vase on Monday: The Blues Have It

Sunday morning was beautiful but wet.  We got rain for the second time within a week.  In mid-May!  I already had in mind what I wanted to cut for "In a Vase On Monday" so I quickly got to it.  There are a lot of new blooms in my garden and it would have been easy to get distracted by this or that but the rain and the cold temperature kept me reasonably focused.

I hadn't even noticed the Delphiniums were blooming until last week, when the top-heavy cilantro/coriander plants in the same raised beds toppled over following the storm that moved through Wednesday night into Thursday morning.  The seed-sown larkspurs (Consolida ambigua) have been slowly unfolding for the last couple of weeks.


The heavy bloom stalks of Aeonium haworthii have been flopping over into paths for weeks now and the rain had exacerbated the problem so I went ahead and cut some of those too.

Sunday afternoon brought bright blue skies and warmer temperatures near the mid-60sF.  My garden now has the fresh, clean appearance that only rain can bring.  The smog that normally blankets the harbor view cleared out with the storm and both the sky and the water were a beautiful blue.

While I was snapping photos of the harbor, I heard a familiar buzz and caught sight of a hummingbird sipping nectar.  As soon as he rose above the foliage I pushed the button on my camera, hoping for the best, and for a change I got lucky.

All in all, Sunday was a great day.

For more Monday vases, visit our "In a Vase on Monday" host, Cathy at Rambling in the Garden. 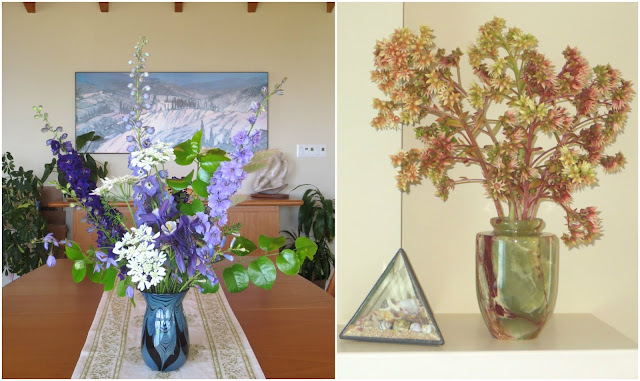