In a Vase on Monday: Feeling the blues

Scilla peruviana, which I've found to be a finicky bulb, has bloomed in my back garden for the second year in a row despite this season's stingy rain.  The bees love it and so so I. 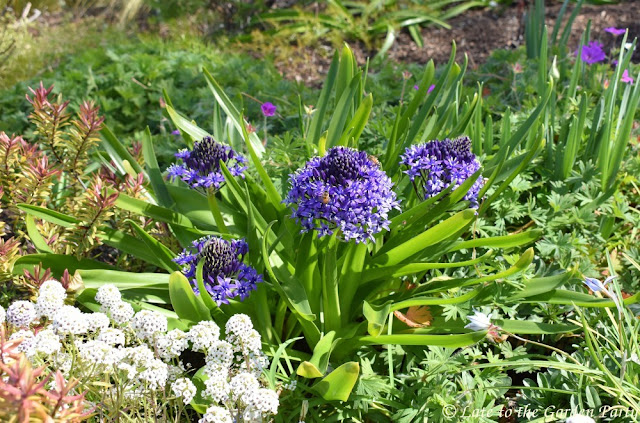 I cut one Scilla stem as the start of this week's vase, sticking to a blue and white theme.


Of necessity, my second vase started out with yellow Freesias.  We got 2 (!!!) rainstorms last week and, although neither could be called a drought-buster, they flattened many of the Freesias, some of which had to be cut before they were stepped on.  Last Monday night's storm delivered 0.15/inch of rain and the second storm, which spanned Friday and Saturday, added another 0.28/inch, beefing up our seasonal total to a still paltry 1.88 inches.  The peninsula on which I live was short-changed by comparison to some areas but our total is on par with the tally for downtown Los Angeles.  However, on the good news side of things, the fears concerning another round of killer mudslides in the areas that burned during the January wildfires weren't realized and the snowpack in the Sierra Mountains, the source of about one-third of California's water, got a boost.

But back to the yellow Freesias and vase #2.  I accumulated a lot of yellow blooms in my round-trip of the garden before reaching the decision that I needed to balance all that yellow with another color besides green.


Visit Cathy at Rambling in the Garden to find more "In a Vase on Monday" posts.