The Slope is a Work in Progress

The slope at the back of the property is another of the areas I initially designated as a low priority for renovation.  Actually, I didn't even discover this section of our new garden until the day our house inspection was conducted.  During our initial tours of the property I'd assumed that the property line ended at the area bordered by the wood fence at the back of what I now call the "dry garden" and the hedge running the length of the backyard.  It was quite a surprise to discover a narrow dirt path descending down a fairly steep slope beyond the hedge.  Other than a large lemon tree at the bottom of the slope, the area had little to recommend it with honeysuckle on one side of the path and weeds on the other.

During the first month we were in the house we got a significant amount of rain (by Southern California standards anyway) and the dirt path down to the bottom of the sloped area seemed particularly treacherous.  When I finally ventured in that direction, compelled by a visceral need to begin cleaning out the weeds that were sprouting everywhere after the rain, I fell repeatedly.  In the interest of making the area accessible, I began campaigning to add a stairway of some type.  As we'd just spent a chunk of change to buy the house, neither my husband nor I felt comfortable laying out a lot of money to bring in a landscape contractor or stonemason.   He-who-does-not-wish-to-be-named-in-a-blog (to be known here as the "Blog-o-phobe") took some measurements and plotted out a pathway, which he built out of pre-made concrete wall segments.  As the existing dirt pathway was hard-packed clay embedded with a zillion small stones, this was no mean feat.  The new pathway is still a bit treacherous but it's now at least navigable. 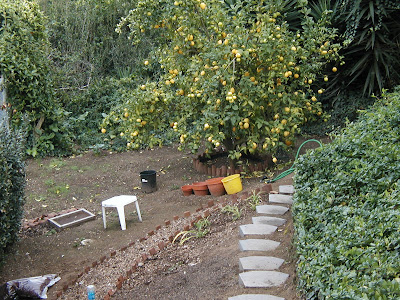 Of course, when I had a way of traversing the slope and got out most of the weeds, I had something of a blank slate and, as my friends know, I have a very hard time letting soil stand uncovered for long.  The prior owner left a large number of wooden tree rings on the property, which I used to break the area into more level planting beds.  I know this was a short-sighted move on my part as that wood will rot within a couple of years but I had the material on hand and I was pinching pennies.  At some point, the Blog-o-phobe and I are undoubtedly going to have to replace the wood borders with stone or concrete.

I added both purchased and home-produced compost to the area within the wood-bordered areas, then began planting.  I probably should have worked still more compost into the soil in this area but, again, impatience and penny-pinching interfered with good horticultural practice.  As the downward section of the sloped area is irrigated only by a hose, I sought out plants that could handle drought.  Also, as the area is in shade for a good portion of the day in the winter months, I selected plants that can tolerate this, although I've pushed that envelope a bit.

The picture below shows the slope in the early stages of planting. 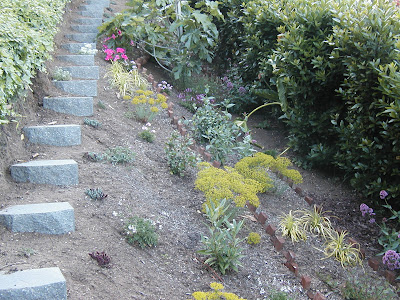 My major plant purchases were Arthropodium cirratum (Renga Lily), Carpenteria californica 'Elizabeth', Euphorbia 'Dean's Hybrid', Liriope muscari 'Pee Dee Gold Ingot', and Ribes viburnifolium (Catalina Perfume Currant).  Perhaps foolishly, I added divisions of Centranthus ruber and Oenothera speciosa 'Siskiyou' from other parts of the property   These last two plants have spread like crazy and, although they certainly help hold the soil, I hope I don't regret their addition.  I certainly won't have an easy time getting them out now that they've established themselves. 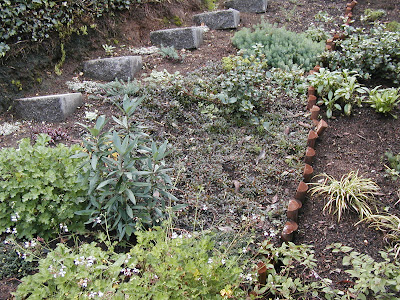 The Renga lily is one of my favorite plants as it seems to tolerate dry shade well and looks good even when not in flower.  I haven't seen this plant in any of the local nurseries but Annie's Annuals & Perennials routinely carries it.  I have this plant in several areas of the property.  Here's a picture of one of these in bloom this past April. 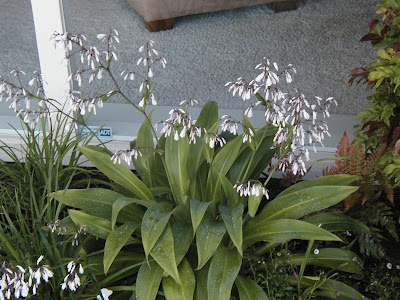 In Spring, I added more plants to the slope, including Monardella villosa (Coyote Mint) and a purple groundcover Abelia (both purchased by mail order from Annie's), as well as Pelargonium 'White Lady', obtained at the South Coast Plaza's annual garden show.  More recently, I've added thyme ('Pink Chintz' again) and a variegated Sedum between the stepping stones.  I'm hoping the beds along the slope will shine in the coming Spring and I've begun to plot my next steps in rehabilitating the flatter and sunnier area surrounding the lemon tree.  I'm thinking ornamental grasses...
Posted by Kris Peterson at 7:53 PM